Modern vehicle architectures are expanding to include Ethernet and CAN FD in addition to existing CAN and LIN networks. The neoVI FIRE 2 provides Ethernet, eight channels of CAN (including CAN FD) and four channels of LIN in one tool. All channels run simultaneously and are time-stamped in hardware. A fully-isolated high-speed USB interface allows messages to be sent and received without risk of damage to the PC.

In addition to working as a PC interface, the neoVI FIRE 2 can operate in standalone mode. It can run real-time scripts, log data to a removable microSD card, and simulate ECUs and gateways. With these features, it is also possible to run a script to reflash ECUs using data from the microSD card. 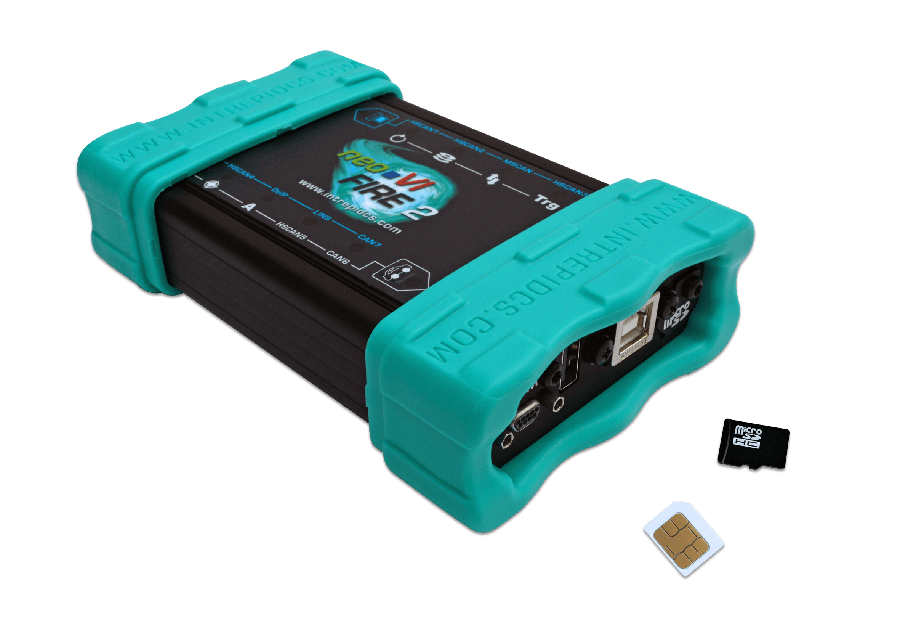 Intrepid’s Vehicle Spy Enterprise software fully supports the neoVI FIRE 2. With Vehicle Spy, users can monitor and transmit on all neoVI FIRE 2 networks simultaneously. Vehicle Spy is required to configure standalone mode. Users can take advantage of the powerful interface to load databases and to write and debug scripts before downloading them to the device.

The neoVI FIRE 2 includes a real-time scripting engine that can be used to perform real-time messaging. For example, an engineer creating an application can load a script into the hardware and interface with the script variables, allowing microsecond-level measurement and control. Through a new feature called hardware acceleration, Vehicle Spy can also be configured to send real-time functions to the device, such as periodic messaging, replay, or scripting.

The neoVI FIRE 2 is capable of logging to a removable microSD card, which uses a real-time, fail-safe FAT32 storage system for reliability and PC compatibility. The FIRE 2 also has a real-time clock to hardware timestamp all messages. Finally, a robust power management system automatically powers down the neoVI FIRE 2, and can wake the device again based on network activity or the connection of a PC.

The Evolution of the Original neoVI FIRE

While the neoVI FIRE 2 was developed primarily to provide new vehicle networks and features, it also provides significant improvements over its successful predecessor, the original neoVI FIRE. These include a more robust case and connectors, much larger script space, SD card data offload over USB, the ability to power the device from USB during configuration, support for a larger voltage range, and an expanded voltage range on MISC I/O channels.

By continuing to browse this site, you are agreeing to the use of cookies, whose purpose it is to provide web analytics and measurements of visitor traffic and browsing behaviorI AgreePrivacy policy