The RAD-Star is a multi-purpose Automotive Ethernet active tap, allowing you to monitor the traffic from both nodes on a BroadR-Reach® / 100BASE-T1 link, and also transmit to both devices.The RAD-Star can also act as a media converter between standard 4-wire 10/100 Ethernet and BroadR-Reach® / 100BASE-T1, letting you connect a PC to an Automotive Ethernet network.

Simply connect both ends of an Automotive Ethernet link to the RAD-Star, which will then act as a “middle man” in the connection, managed by a custom-designed active tap chip. When either device sends a message, the RAD-Star will seamlessly retransmit it to its partner with low latency, and also send a copy to a connected PC over standard 10/100 Ethernet for monitoring. The RAD-Star operates in full-duplex mode and is bidirectional, so using software such as Intrepid’s Vehicle Spy, you can not only view all messages sent by both devices, but transmit custom messages to both devices as well.

If you connect just one of the RAD-Star’s links to an Automotive Ethernet ECU, it acts as a media converter, allowing you to receive from and transmit to the connected node using your PC.

The RAD-Star records the time that each message is received on its Automotive Ethernet ports. This hardware-level timestamp is then transmitted in a special wrapper frame over its conventional Ethernet links, encapsulating the original message. This special format allows even error frames, which are normally discarded by Ethernet devices, to be preserved for analysis and diagnosis. 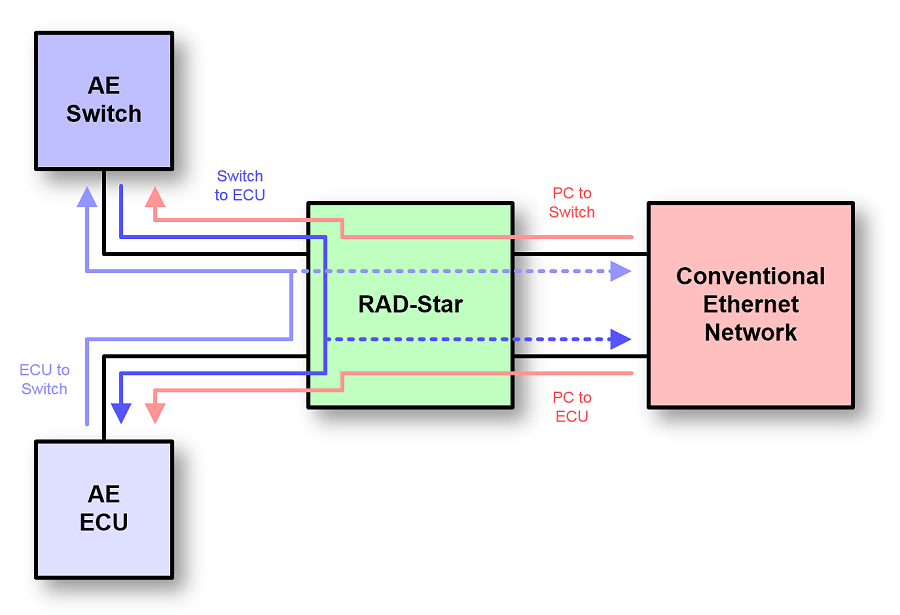